Join us for an evening of hilarious comedy featuring comedians Moody McCarthy and Sam Morril!

Between the two of them, these comics have been on Comedy Central, America's Got Talent, Jimmy Kimmel, The Late Show, and so much more. And now they are performing 'Live' for Rotary for just one night.

It's a perfect date night for Valentine's weekend. Or gather some friends around a large TV for some serious laughs (is that an oxymoron?)

Moody grew up and started his career in Syracuse, NY. He has been on David Letterman twice, Jimmy Kimmel, America’s Got Talent, and more. He can be heard regularly on SiriusXM, and was recently featured on Last Comic Standing, yet people are still asking about his "House Hunters" episode.

Morril is one of the fastest-rising stand-up comics in New York City and one of the best joke writers in the scene today. He is a regular on Comedy Central’s This Week at the Comedy Cellar, where he appears frequently when not touring cities across the nation.
Proceeds will benefit New York District 7120 Rotary Clubs and the Rotary Foundation.


Some content may be appropriate only for adult audiences 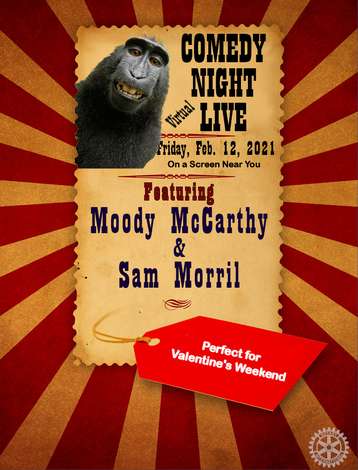